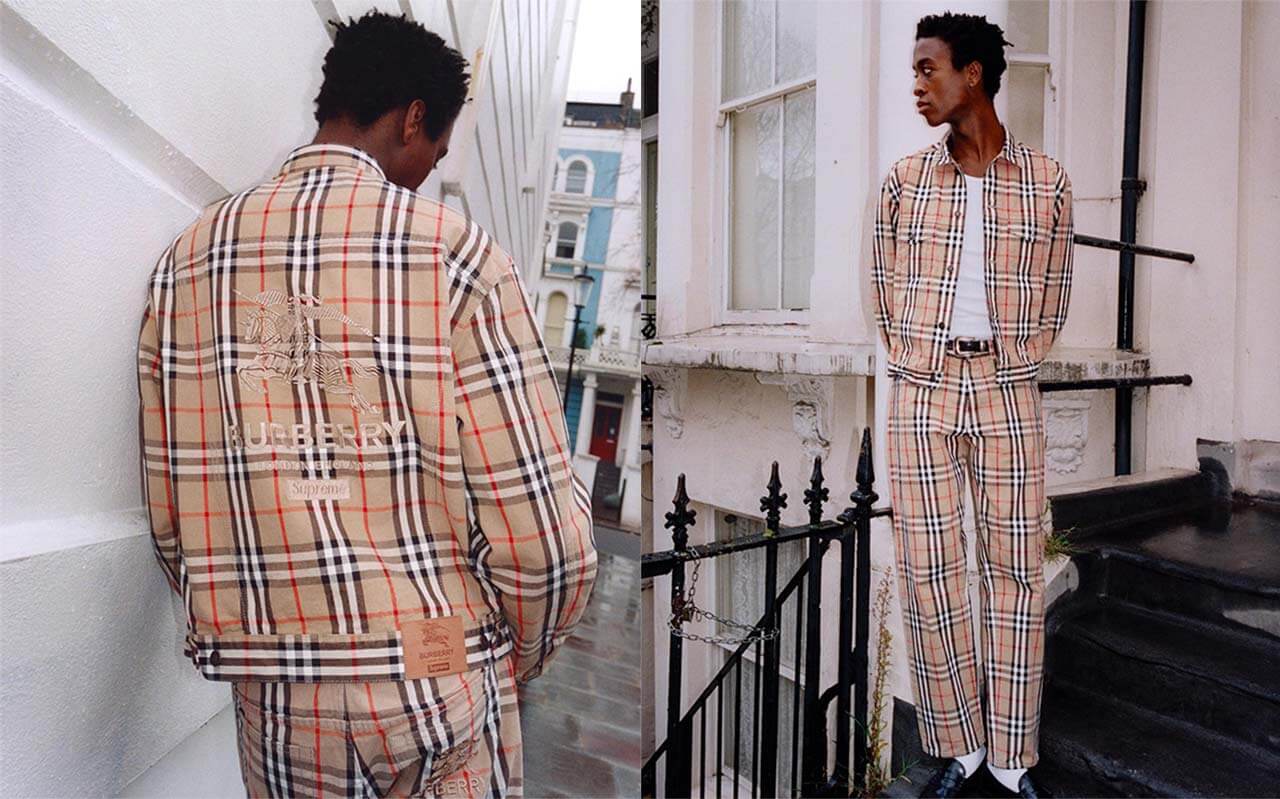 According to Supreme Leaks, talks of a potential collaboration began in January when it suggested to its 2.1 million followers that the two could work together. A global release of Supreme x Burberry Spring 2022 will be available beginning March 10, 11 am EST in the U.S., and March 12, 11 am JST in Japan.

Thomas Burberry founded the British luxury fashion house in Basingstoke, Hampshire, back in 1856. Back then, he was 21-years-old and an apprentice draper. The brand focuses on outerwear with the idea that clothes should protect people from the elements. Burberry developed gabardine, a lightweight yet durable fabric derived from local shepherds’ methods of waterproofing their smocks. Burberry garments and the material became popular due to their protective properties, natural ventilation, and durability.

Following its success, Burberry would outfit military personnel and explorers throughout the early 20th century. Norway’s Roald Amundsen and his team were the first people to reach the South Pole in 1911 wearing Burberry gabardine tents and clothing. The British mountaineer George Mallory to the summit of Mount Everest and British explorer Sir Ernest Shackleton in Antarctica are notable names as well.

In addition to weatherproof clothing and accessories for the British Armed Forces, Burberry developed the trench coat and its successor, the Tielocken coat. Throughout the years, the fashion house has expanded its outwear offerings and established Ready-to-Wear and accessory collections. Supreme has tapped Burberry for a special SS22 collection celebrating the iconic brand’s longstanding history. Burberry’s status as one of the most iconic and enduring British labels in history will be strengthened by this collaboration. The collaborated collection includes a Trench Coat, Down Puffer Jacket, Denim Trucker Jacket, Rugby, Hooded Sweatshirt, Jean, Denim Short, and T-Shirt. The apparel is complemented by accessories, such as a Crusher, 6-Panel, and Skateboard.

There have been talks of the collaboration since January. Supreme’s Instagram account hinted to its 2.1 million followers that there could be a partnership between them. Embellishing his 750,000 followers with a denim two-piece sporting the British brand’s signature chequered print as well as the logos of each brand, he also hailed Supreme’s newly appointed Artistic Director Tremaine Emeroy. Additionally, collaborations have been tested and proven strategies for the model. Last year Supreme partnered with Nike, Duraflame, Shrek, and The North Face. However, this partnership marked the first extravagant crossover since Supreme teamed up with Louis Vuitton in 2017.

There will also be a co-branded trench coat featuring black and pink colorways, denim trucker jackets paired with straight-leg jeans, and down puffer jackets alongside the two-piece modeled by A$AP Nast. There is also a great collection of fun equipment like caps, bucket jackets, skate dates, and pyjamas. The American streetwear brand hasn’t been shy about paying homage to Burberry before. Most probably, the Supreme x Burberry Spring 2022 collaboration will launch their collection globally on March 10. On the same day, Riccardo Tisci is all set with his first Burberry show in London for over two years.

From March 10, 11 a.m. EDT in the United States and March 12, 11 a.m. JST in Japan, the Supreme x Burberry Spring 2022 collaboration will be available exclusively via the streetwear imprint’s site. Burberry will offer leather track jackets, leather track pants, and silk pajamas on March 10 in the US, UK, and Europe. It will be available in all other markets from March 12 onwards.