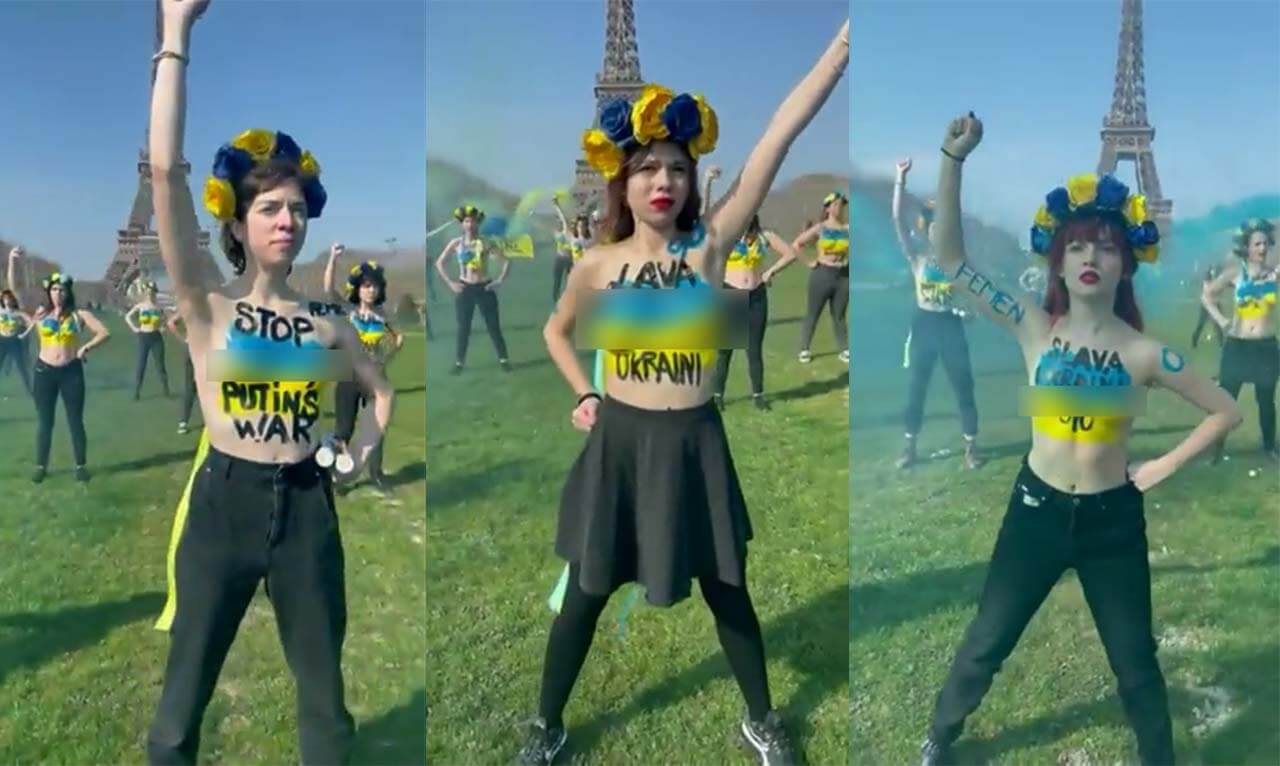 Read ahead to know more about women in Paris going topless to protest against Putin.

Women in Paris go topless to protest against Vladimir Putin

As countries all around the globe have condemned the war between Russia and Ukraine, there’s trouble and tension rising in Ukraine more. With people protesting the acts of Russian President Vladimir Putin, here are women in Paris going topless to express their protest on the same.

A video has surfaced on the internet that shows women in Paris going topless in front of the Eiffel tower to protest against Putin after the war with Ukraine. It was reportedly on 7th March that a Twitter handle of Visegrad24 posted videos of topless women condemning Putin.

Women in Paris paint themselves in Ukraine flag color with slogans

As the video of the topless women in Paris went swirling on the internet, it caught the attention of all. The women visible in the video had themselves topless with Ukraine flag painted on them with them also shouting protesting words for Putin too.

I liked it … I didn’t catch what they were shouting, I didn’t even see if they were blondes, brunettes, or chestnut-haired,

responded Putin In 2013, after this protest by topless women from the activist group Femen. pic.twitter.com/kDnhdyTdg0

Moreover, as the women protested in front of the Eiffel tower against Putin, they also had several slogans painted on their bodies. Some of the slogans on their body read as ‘Stop war Putin’, ‘Feminists against War’, ‘Slava Ukraini’, etc. Meanwhile, this way of protesting has been used for the first time by women as it has happened in the past as well.

Putin has faced protest by women going topless in 2013

As Visegrad24 posted the Paris women going topless to protest against Putin. It also mentioned in the later tweet that Putin faced a similar protest in the year 2013. However, there was one protest in Ukraine too when Zelenskiy was to be elected as a president of the country.

A #Femen activist staged a topless protest outside a polling station in #Kyiv where candidate Volodymyr #Zelenskiy had cast his ballot in the April 21 presidential runoff vote. The woman warned voters that a Zelenskiy presidency could end up being a “funny mistake.” #Ukraine pic.twitter.com/Ptbv3AfeDl

Meanwhile, while the globe is witnessing several different protests, the tension between Russia and Ukraine seems to be unaffected by this. While several countries are trying to sort out the war between the two, Russia is moving ahead in Ukraine with its military actions.